Today, Data.gov added a new capability to its growing arsenal of tools that allow for using the data the website makes accessible. The so-called Data.gov GEO Viewer has some interesting capabilities:
There are some limitations with this viewer, most of which are due to the fact that it downloads data from the source every time someone wants to see it:
Are we there yet?

No. This GEO Viewer is not the end point. It's another step towards allowing users to interact and understand the data discoverable through Data.gov. The viewer illustrates the need to include more map services in Data.gov. Even registering map services alone may not be enough. In this world of service architectures, platforms, and such, we become more and more dependent on each other. Offering a service means signing up to a responsibility to keep this service running and available for an extended period of time.


Oh! And the proof of the pudding is in the eating! Here some samples:

Give it a whirl and provide your feedback to Data.gov.
Posted by Unknown at 9:36 PM 2 comments:

Announcing the ArcGIS Editor for OpenStreetMap

For a while, ArcGIS users have been able to use the OpenStreetMap (OSM) content as a basemap in ArcGIS Desktop or in web applications thanks to a republishing of this content through ArcGIS Online. After the earthquakes, we have received many requests from users of ArcGIS who want to contribute to OSM, but who prefer to use the editing capabilities of ArcGIS Desktop.

For users of ArcGIS 10 this is now possible using the new free add-on ArcGIS Editor for OpenStreetMap.

The ArcGIS Editor for OpenStreetMap is designed to help ArcGIS desktop users to become an active member in the growing community of users building an open and freely available database of geographic data.

The provided tools allow the user to download data from the OSM servers and store it locally in a geodatabase. The user can then use the advanced editing environment of ArcGIS Desktop 10 to create, to modify, and to delete data. Once the edits are complete, the edit changes can be posted back to the OSM server and become available to all OSM users.

The interaction with the OSM server is accomplished using as set of geoprocessing tools to download, to manage, and to upload data.

A total of six tools support the a disconnected editing like workflow: download data from OSM, edit locally, and upload the result back to OSM. 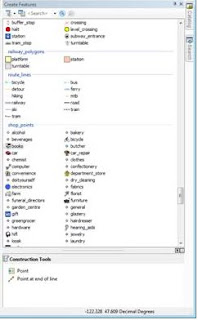 OSM has a very flexible data model, to support some consistency in created feature types. However for more focused data capture activities, such as those that occurred after the Haiti and Chile earthquakes, a more focused data model approach is suggested. To use the new ArcGIS 10 template feature, we have mapped the common tags used in OSM to attributes and feature types, created templates for these, and implemented suggested symbols.

Editing is straightforward. After downloading your work area from OSM, you use the normal ArcGIS Desktop editing features. There are some things to keep in mind in this first release:
As with any multi-user editing environment, you may run into a situation where multiple users edit the same area. This results in conflicts when trying to upload your edits to OSM. In order to mitigate the conflict the ArcGIS Editor for OpenStreetMap offers a simple Conflict Editor to help resolve the situation. Best practice is to edit a relatively small area and to save back to OSM frequently.

We are releasing this first version of the ArcGIS Editor for OpenStreetMap. and are looking for feedback. More details on the tool will become available over time, including access to the source code, and enhanced documentation.